R – When two of television’s most popular shows are called “The Voice” and “America’s Got Talent”, we had better be doing something to keep music education on the front burner of being an academic subject. There’s nothing wrong with either show, but there is a cultural myth in this country that singing is about interest and/or talent… and that’s about it. Name one other core school subject area where either matters, and yet somehow both are perceived as virtually essential to being enrolled in a music class. Worse yet, this view is shared by students, parents, administrators, guidance counselors and so on.

What are we doing about it?

6 and a half years ago Jarika did one of the bravest things I’ve ever seen a music teacher do when she began her first ever concert as a music educator by teaching the audience to read music. It was extraordinary on two fronts. First, it was a demonstration by a beginning teacher that it is okay to be professionally brave and take risks. I think we can all learn from that. Second, she demonstrated to the entire assembled audience that literacy and singing are academic skills. The audience left her concert that night buzzing about what a game changer it was. We have the technology, ability and opportunities to change our community’s perception of what it is we do and why it is essential.

I have not been able to hold my concerts in a space with either a sound system or a projector/screen so I have done my best to replicate this with a small piece of sheet music placed inside each program. It actually worked pretty well but I’ve planning for the day I could finally do this in an auditorium as well and my first concerts in our new one allowed me to do so. I hold the same concert twice in a week’s time so I can implement an evaluation and revision process with my kids between them. So I got to do the audience music reading twice. This video is of the second time: teaching the audience to read music.

The reaction from the audience was positive, but the details coming from the kids in the following days showed me that this has to be a regular part of all my concerts from now on. I had stories of kids telling me that when they got home their parents actually initiated conversations about reading music and showing them even more!

If a concert has the potential to cause our communities to discuss and think about music as a skill, why would we not be tripping over ourselves to make that happen? Let’s spend some time thinking about our public performances and what messages they send to our schools and communities. The best music education advocacy is a proactive one. Our concerts are largely untapped resources for providing this. 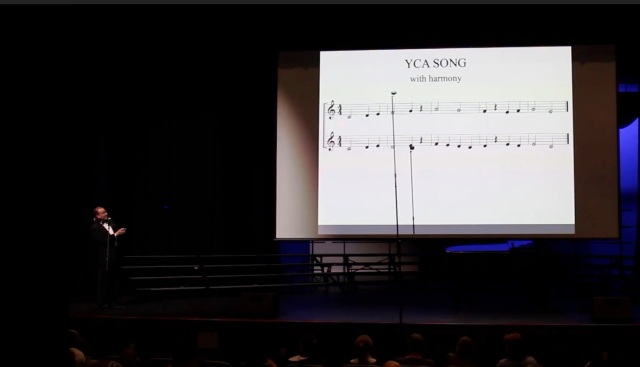