be bop a lula

R – Back at the advent of Rock and Roll, the original host of the Tonight Show, Steve Allen, had a routine where he would take a popular song and read the lyrics as prose. The sheer ridiculousness of the lyrics would quickly become apparent 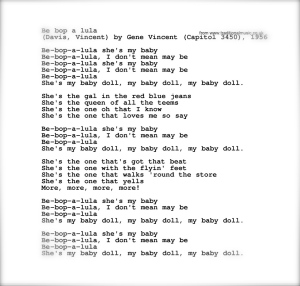 simply by reading it all out loud. Here is a clip of him reading Gene Vincent’s Be-Bop-A-Lula (great old chart btw). Funny stuff in the 1950’s, funny stuff still.

What made me think of that? Well, last November I did a blog post where I took an author to task for defending letter grades. At the end of it I provided a link to a debate site on this topic. Everyone is entitled to their opinions, this site allows for both sides of the argument to be heard. Every once in awhile I go back to see the latest arguments for and against. In doing so again a few times this Summer, I wondered if the people attempting to defend traditional letter grades actually READ their arguments out loud when they’re done writing them. Because they’re hysterical! Some new levels of absurdity are being encroached upon, so I thought it would be fun to point some of them out here for this morning’s post, especially as Maine moves further away from grades and toward actual proficiency (take heart, it’s the right path!). Mind you, this wasn’t terribly selective; this is virtually a straight run down of what’s posted on that site. If it appears that I’m getting a bit too sarcastic, and making a bit too much fun of some otherwise very nice people, ummm, that’s because I am. Items in red are copy/pasted from the, “No, grades should not be eliminated” column. Comments following in black may or may not be a randomly chosen (me) public school music teacher’s side comments.

Students should have a way of differentiating between each other. Absolutely. What’s public school education if we’re not labeling SOMEONE as the lowest 20% of their class?

The terms “Approaches”, “Meets”, or “Exceeds” Standards is difficult for me to explain to my daughter. But explaining what a “C+” actually means on the other hand is a piece of cake…

Students need grades in order to get motivated and to do well. Just what I’ve always said: what’s wrong with this country is people who think that learning should be for learning’s sake!!!

A letter grade is also used as a goal, like a kid is aiming to get an A in math, and that’s his goal, and he pushed to achieve his goal. That’s RIGHT! Why have goals as silly as achieving academic learning targets attached to rubrics which actually articulate what you learned and to what degree you learned it, when your goal can be merely to get an A? You tell ’em!!!

Letter grades are more accurate than number grades for 1 reason only, Since there are more letters to use to grade someone than actual numbers the grading turns out to be more accurate. This is why the letter grades should NOT be eliminated. You can’t make this stuff up, folks.

Standards Based Grading is a way to raise low performing students scores while lowering high performing students scores so everyone can be the same. Everyone in this world is not the same. Some people have high IQ’s others average. You want quick people who understand difficult concepts immediately to have jobs like surgeons, lawyers, etc. We aren’t all the same, if you want a system for slow learners use SBG, however, I don’t believe this is a good system for children that have high IQ’s it holds them back and takes away grades they need to college admissions into elite universities. My bad. I forgot that success in school – learning – is supposed to be limited to just the smart kids. No WONDER education is so expensive and so difficult: we’re actually trying to teach EVERYBODY!

Also whats a check mark gonna teach you? (…and what’s the absence of a comma and an apostrophe among friends?) If you do something wrong and you get a check- it looks like an A- so you’ll (ah, there it is!) think you did good (or even well!), when you really didn’t. Which then you will keep doing the wrong thing, thinking its the right thing. Which then you will keep writing really confusing sentences. Okay, you got me, I’m sold: I’ll make sure that I don’t fight for a national system of check marks any more.

If children get bad letter grades, they will be motivated to work harder to get better letter grades. Wow. Clearly, good letter grades motivate high achieving students to do much worse, so the opposite MUST be true! Oy. #commentsmadebypeoplewhodontactuallyteach.

If you use numbers, they are more complicated. 1 could be the highest and 3 could be lower or the other way around. Did I already mention you can’t even make this stuff up?

If you don’t care, you shouldn’t be allowed to get credit for something you did not try/understand. If you’re on the job and you say you cannot do something and it was something you were supposed to learn then what can you do but realize you lied about your credit? I have no problem with grades. The way the grades are achieved is the problem, not the actual grade. It should not be based on our memory and but, on our capability to get the right info/answer at the end. Um, this is an argument someone is using for KEEPING letter grades?

This system has survived for a very long time and continues to be used because it is working. There you have it: No Child Left Behind and Common Core were introduced as necessary measures because our system is “working”.

The letter includes effort, problems that don’t exactly answer the assigned question but show that they understand, and it’s more up to the teacher. Grades should never, EVER reflect what you actually know and are able to do, it’s how hard you try! And don’t forget: grades must always be SUBJECTIVE!!!

Kids get to look forward to getting A’s, B’s, C’s, D’s, and F’s. When you complete a project, kids look forward to what they will get to see on their report card. It’s inconsequential of course what they actually learned, it’s the grade that counts!!!

Change MUST BEGIN at the post-secondary level and work its way down through the system in terms of its requirements for student admittance and then at the high school level and finally at the elementary level. If this only happens at the elementary level, we are not preparing students for grades that they will receive at higher educational institutions, which is also one of the jobs of the elementary school system. You know what? Spot on. For real. And this is why Standards Based Grading is doomed, and why a grading system developed prior to man’s learning how to fly will be entrenched from now until kingdom come: unless and until standards becomes culturally embraced by all educational institutions in this country. And that means higher ed getting off its throne and actually working with public schools to determine the future course of reporting out what our students know and are able to do. Common Core? Bring it. As long as grades are still in place, it all won’t amount to a hill of beans anyway. In the meantime, let’s not be guilty of sitting still: we need to work towards something more authentic than letter grades either way. Let’s make this the year to really do so.

This entry was posted in Assessment, Standards. Bookmark the permalink.