R – I was having a conversation with a colleague this week about kids in general from the teacher perspective. One of the amazing transformations for me in my professional journey was the Randy Pausch head-fake when we implemented the graduation requirement specifically for music at York. I thought the challenge would be working with the hundreds of kids who had no desire to sing or take a music class. It can be, but the opposite has largely been true. In so many ways these students have provided some of my greatest joys.

When we view our students, do we view them as they have been in the past, as they currently are, or do we believe in who they can be? I’m not talking about academically: the POINT to being a teacher is to believe in their potential and to foster it. Um, we’re actually kinda paid to DO that. I’m talking about personally. We all have those students who hang out in our classrooms during their free time. Invariably there are those students who possess the maturity to be leaders in the classroom and make our jobs (and lives!) easier. We have our all-staters and kids who work their tails off. We give awards to those kids at graduation and recognize them as often as we can.

How about the other ones?

When I began my stint at Winnacunnet High School in 1996, I had half the football team in choir because they thought they could just show up, not sing and get the credit. When world war three broke out in that classroom in the days that followed, every last one of them dropped the course…. except for one. Nick. A senior. He stayed. He decided that he was going to stay behind and make this new teacher’s life a living hell. Initially, he succeeded. But I decided a) that Nick was not a “bad” kid, b) Nick might even be a great kid – and simply hadn’t shown it yet and 3) that I was going to make him the poster child for my chorus. Literally. After a few weeks I made a HUGE sign and posted it on my upright rehearsal piano facing the choir. I don’t recall exactly what it said, but it was along the lines of, “Nick, please stop that.” I announced to the ensemble that it was a time saving measure on my part so all I’d have to do during class was to stop, point to the sign, and continue with the rehearsal. The kids ate it up! So did Nick… which HE didn’t expect. He went from hating class to actually kind of looking forward to it. We started talking outside of class a bit. We’d joke about how funny he was in class the day before or how funny *I* was in response to him. 😉 What happened over time is that Nick stopped misbehaving altogether, the sign came down, and he became the face of the ensemble. That Spring, my dress rehearsal for the chorus concert fell on senior skip day. I had 17 seniors. I made an emotional speech to them the class before saying that if they had learned anything from me at all about accountability, they would be on that stage on senior skip day block 2. 16 of those 17 seniors showed. I’d never been more proud.

Nick was one of them.

Not only that, the next day I learned from another student that Nick got up in the face of the one senior who didn’t show up and reamed them out. You want to know the impact Nick had on ME? 22 years later I’m writing a blog post about him on a Saturday morning.

My colleague who I was talking to related a similar story more recently. She had been a substitute in a school system for elementary level kids, and not even in music. There was a student in the school who was always in trouble and all the teachers hated having in class. This wasn’t hyperbole, the teachers actually transparently said so, and was a routine topic of conversation in the teacher’s room. Let’s call the kid “Ty”. He was 8 years old and was always in trouble, always having meltdowns and his presence was always dreaded. My friend heard about him early on and ended up having him in class one day. She decided that NO kid deserved to be treated the way that whole faculty had treated him, and that she’d see what she could do. At the start of class she took Ty aside and said, “I really need your help today – I’m a sub, so I need a student helper to assist me, so that’s what you’re going to be for me today.” Here was Ty’s response: “But, I’m a bad kid.”

She said that she hadn’t worked with him before so as far as she was concerned he wasn’t and that he was going to help. And he did and had an okay day. Her end of day report mentioned that Ty was the best student in the room and how helpful he was. The regular teacher the next day was more than perplexed. After that my colleague started requesting classes that Ty was in when she was called to substitute. Ty sometimes had his meltdowns, but he would be reminded that, “I really need you today” and he’d snap right out of it. Over time he showed what happens to a kid when someone believes in them.

Neither of these stories makes either of us a “good” teacher, or even a good person. And no one reading this today hasn’t had similar experiences I suspect. But when we stop looking at our role as teachers to love and support those who make our jobs and lives easier, and shift it to loving and supporting ALL our kids, ESPECIALLY the most difficult ones, a transformation occurs… in them and in us. All of the sudden our classrooms become a petri dish instead of a hierarchy. Our careers shift from looking for the best and brightest to looking for the neediest and least convenient for us. Who needs us most: the ones who are going to swim either way or the ones who are at risk of drowning? And is it a legitimate excuse for us to say we don’t have time for them, the energy for them or the wherewithal to seek them out in the first place? I rant on this blog all the time about academic accountability in the music classroom (are you a co-curricular activity in an academic subject’s clothing?). But I have also said that being academically accountable does not negate in any way our primary responsibility as people: to believe in our kids, ALL of our kids. Identify the Nick, identify the Ty. Make them your primary focus and watch what happens. You would think that the end result is that you make them better. It’s not: invariably, it’s the other way around. 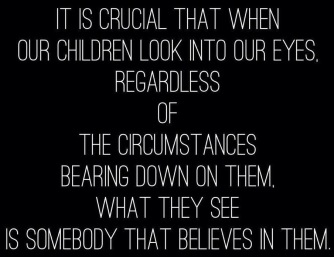