R – I don’t sing so much any more (conducting really is my first love) but when I was teaching in Vermont in the early 1990’s I decided for a term to commute to Worcester, Massachusetts to perform with the Worcester Chorale under the direction of their esteemed director, Dr. Gerald Mack; a prominent figure in New England choral music for over four decades. It was a three and a half hour commute round trip but it was worth it – a wonderful group that performed outstanding literature really well, giving me the chance to learn from a director I really admired while also performing some masterworks with orchestra in concert. I remember the “rush” of being challenged musically and the joy of sitting in rehearsal with my brain swimming in more information than I could process. The real fun for me was – and remains – the analysis of everything that’s going on in the music and how I respond to it at any given moment. Here’s some of the “good stuff” that I loved to analyze as a singer in rehearsal:

* Is my tone consistent up and down my vocal range, and is it consistent from vowel to vowel? Different languages present different types of challenges, but good tone is good tone. For me, I change how I physically produce my sound the higher the notes are. I also have to be sure I’m removing all upper tension (throat, neck, face) as I sing higher notes and especially faster passages, constantly adjusting how I phonate during rehearsal. Simply saying, “Well, this is just what I sound like tonight…” is a cop-out in my book and I never wanted to be guilty of that.

* Where and how am I placing my consonants? Are my phonated consonants (“mm”, “vv”, “ll” etc.) appropriately produced so that the note I am singing on them is sung properly? I love this part of singing choral literature – the vowels are the primary meal but the consonants are the dessert… making a distinction in any given phrase between the hard and 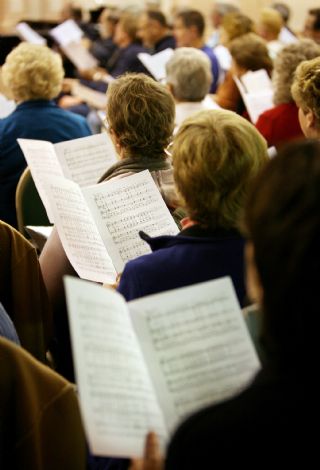 phonated consonants really brings the text alive. Am I singing both with the same emphasis? Am I improperly producing the consonants differently depending where they fall in the word? For me (most people?), I have a tendency to over sing the starting and ending consonants and undervalue the ones in the middle of the word and this is a common issue for even the best of singers. I love sitting in rehearsal and fixing this issue.

* Is my phrasing appropriate for what the director is looking for and am I able to compensate for the rest of my section when theirs isn’t? I can listen to a selection in rehearsal, watch the conductor and do what he or she says, but is my section and even the entire choir responding appropriately as well? Sometimes I can adjust my phrasing to match or “balance” the phrasing going on around me. This is where the ears have to pick up the other sections in a big way.

* Is my intonation part of the problem or part of the solution? Every second of every rehearsal that I sing in, Intonation “happens”. It may be good, it may be bad, or it may be somewhere in-between. The issue therefore is, at any given moment, how is mine and am I contributing in a positive way? If I’m worried about notes, I’m likely not too worried about intonation which is why I try to learn every note BEFORE rehearsal begins so I can concentrate on this issue.

* “Get the “lead” out!” These and additional issues would preoccupy my mind in rehearsal but then – for every one of them in every single measure – how would I then write shortcuts/reminders in my music to remind me what I needed to do? I don’t think you could go three measures in any of my music without seeing a pencil marking denoting breath marks, phrasing, apex of phrases, underlining difficult parts of words, self reminders that at a quiet passage for instance I had to sing the “n” mezzo forte but the “l” pianissimo. To this day I can’t sing in a choral rehearsal if there isn’t a pencil in my right hand, and if I go four minutes without writing, underlining or circling SOMETHING, I feel like I’ve absolutely cheated the conductor as well as the composer and myself.

I’ve said often that it is more important to be an intelligent and engaged singer than a talented one. I also believe that music is work, but that it’s also a labor of love. I hope these examples of my “not-so-psycho” analysis in rehearsals gives some insights as to why I feel this way – mentally and manually “elevating your game” as a singer of the choral art.

This entry was posted in Music is work, Rehearsal. Bookmark the permalink.