R – In my last post, and a few others as well I believe in the last year, I alluded to my KSC sophomore education professor, Stephen Smith. I could write a book on the lessons he taught his students, and he is more responsible than anyone for the type of educator I’ve tried to be. Two days ago I was honored to guest conduct a wonderful High School choral Festival in New Hampshire… it was formed 9 years ago with specific growth goals in mind for the students, a truly student centered event. As I reflected back on the day on the drive home Thursday night, I thought often of Steve. In retrospect, the day ended up being a microcosm of what Steve told us we should always be trying to do as educators. Educators of ANY discipline or subject area. He told us to be like Peter Pan.

“Bring your students to a different and exciting world.” Any honors festival begins by bringing diverse people together in a new environment. That much is a given. But that environment will dictate the success or failure of the event. I really believe that. The students are already outside of their comfort zone being around so many new people… what is the teacher going to do to turn that environment into a comforting, welcome one? I think that needs to constantly be reassessed by every teacher in every classroom every single week of their entire careers. Providing students the opportunity to interact, laugh with each other, giving them the opportunity to see what positive things each person around them brings to the table, that’s all pretty essential stuff. But it’s a tap dance though, because doing so runs the risk of loosing the student’s focus and concentration too. Doing one without loosing the other occurs through trial and error and constant practice on the part of the teacher. I will never be able to overstate the importance of finding this balance in the classroom. Steve knew what he was talking about here… and developing a classroom atmosphere that is comforting, engaging AND focused is a lifelong goal of any worthy educator, especially in music where requiring the student to perform in full view of their peers is a daily expectation.

“Be who you are.” The demeanor of the teacher can take many shapes and forms too, and I’ve seen successful classrooms with conductors who are complete goofballs and others who are very stoic. I have a conviction that either way, it’s only effective if the teacher is wearing their personality on their sleeve. If it’s contrived, the kids will know it! There is no one smarter than a teenager (I will always believe that) and their BS-ometer is fine tuned and well crafted. If they see a teacher who isn’t being authentically themselves, the kids will see right through it and any sense of trust is out the window. In the story of Peter Pan, Peter was exactly who he is, and the others gravitated to that. Not a bad lesson to remember. The problem here is that, to a degree, this requires you as a person to become vulnerable in front of them. If you are going to be authentic, then the students will necessarily see you. I don’t believe there’s any way around that. I have seen some colleagues over the years turn their classes into forums to discuss their own personal lives – that is not what Steve was talking about (and those colleagues should have been fired), nor does it mean allowing students to become your friends, et al. I know the difference and so do you. Steve simply communicated that, within all professional parameters, being an effective teacher means putting yourself out there as you are, warts and all, serving by example that it is okay to do so. How many times have we heard, “we want you to be yourselves”, said by someone who isn’t?

“Cause them to grow.” In a safe environment, get the students brains to hurt. Get them to go outside the 9 dots. In a guest conducting scenario, I love challenging the students with choral concepts that require them to rethink their own beliefs and perceptions about choral music. The simplest points such as, “Why do we inherently equate dynamics with pitch?” “Why, when I asked for better diction, did you sing the vowels louder?” “Why do we inadvertently equate tempo with dynamics?” Singing higher notes quietly and lower notes loudly in warmups, singing with pianissimo vowels and forte consonants, singing slower loudly and faster quietly… it requires the singers to become analytical, and they grow. Even in a one day festival I mess with the singers tone a LOT. I do a number of different things that requires them to think pretty deeply about their tone and how they should develop theirs. These are just skimming-the-surface examples, but what is going on in the classroom or rehearsal that causes the students to be different when they leave than they were when they arrived? I have a very strong conviction that merely “teaching them more facts” doesn’t get it done. When I began my career, I used to believe that the most important thing in guest conducting is getting the right notes and rhythms in place so that the kids can really enjoy the concert. I don’t believe that any more. Yup, they had BETTER musically perform the correct notes and rhythms and dynamics and phrasing and articulation, doing so with impeccable posture and breathing technique while healthily producing a mature, rich vocal tone in correct proportion to the others in their section and the entire choir, for the purpose of bringing back to life the musical intent of the composer!!! 🙂 BUT, that is not going to be of lasting value to them as much as getting them to rethink things and grow as musicians and as people. I love all the challenges of guest conducting, but accomplishing as best as possible the former goals while making that latter one the highest priority is the greatest challenge of all. And every ounce of this is likewise true in my own classroom.

“Let them go.” The last thing that happens to Peter Pan is that he has to let those he has grown to love go. And that happens all the time to us as teachers, doesn’t it? But the beauty of it, and the healthiest thing about it, is that’s the whole point to it all. The overused statement of, “catch them a fish or teach them how to for themselves” is applicable. I used to take this too far, and I would emotionally shut myself off from my alumni, because that’s what I felt I was supposed to do. It is a phenomenon of the last 6 or 7 years that I have opened myself up to keeping up with them after they go and it’s been one of the great joys of my life to do so. But Steve’s Peter Pan lesson still applies. If we as music educators are going to do right by our students, we need to let them go. And if we did our job right, they – and we as teachers – will be prepared to have that happen successfully. I always want to be here and available for my alumni, but having them keep in touch doesn’t negate one ounce what Steve was driving at. Are they prepared to move on as a person and/or musician they weren’t when they arrived? In a guest conducting scenario, this – to me – is the litmus test of if the festival was even worth holding or not.

Guest conductors always get no shortage of kudos… they’re nice to hear but I always reflect on a quote I reference often by singer/guitarist Lindsay Buckingham, “If you’re any good at all, you know you can be better”. I could write a novel on all the things from Thursday I wish I had done better both in rehearsal and in concert. But Steve wasn’t about us as educators being perfect. It was about going after our true goals as educators as best as we could. And that translates powerfully to our own classrooms. We do NOT get the rounds of kudos for what we do day in and day out. But what we provide our students is far more valuable than what a guest conductor could ever provide, because we see them daily. And remembering what Steve taught me, including the lessons of Peter Pan, has helped me immeasurably. And it all works. I know this first hand. Because, after all, Steve was my Peter Pan. 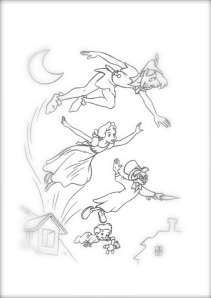