R – The first of my two Portland Community Chorus performances was last night and I was really pleased with how it went. There were gobs of moments where I feel the chorus captured the artistic intents of the composers to a very high degree and countless moments of very intelligent singing. By any measure, I’d call it a success. But I also know my singers. While I think they were happy with it overall, after months of nit-picking every possible detail on every single measure, they knew what they didn’t nail. Every single performer could identify measures, notes, perhaps even entire pages that they weren’t happy with. I know that’s certainly true for me and my conducting. So this leads me along a natural progression of thought to the eventual question: why should we be happy with a performance we know we didn’t perfect in execution or in concept?

My answer lies in the work of neo-impressionist painter, George Seurat. Seurat (while he was still in his early 20’s no less… re-read my earlier post on beginning teachers) devised a systematic approach to painting that exclusively employed dots without the use of any brush strokes at all. It was his belief that colors jump off the canvas to a remarkable degree when the human eye is the entity that mixes the pigments, not the painter. For example, a traditional painter would paint an amethyst with purple pigment. Seurat would have painted it with blue and red dots. From a distance, each amethyst would appear purple, but Seurat’s would be so via the observer’s eye. I love this concept. The foundational concept is that the observer gets to create the painting, the painter merely sets up the opportunity for them to do so. The other corresponding concept is that the observer must stand back from it to truly “see” what has been accomplished. Consequently, the creator who is at the same time working out the minutia up close is juxtaposed with the observer who does not see the minutia but receives the desired effect.

It is this design that I think perfectly defines the relationship between the chorus and an audience in performance.

Seurat’s most famous paining is Sunday Afternoon on the Island of La Grande Jatte. A brilliant work, it was composed on a canvas 7 feet by 10 feet long. SEVENTY square feet! And he pained with DOTS! Are you kidding me? But the wonderful result is that an observer must stand way back to take in the whole, thus removing the minutia that created it all from the naked eye. Yet without the minutia, there’s no painting to even observe. That, my friends, is the role of a chorus. This instructs what to rehearse, HOW to rehearse, how to present material, how to convey musical ideas… and it impacts pitch, tone, rhythm, inflection, phrasing, harmonic balance and diction. And it does so for each of these elements multiple times every second of every song a choir sings. I’ve often said that in the history of mankind there has never been a “perfect” choral performance by anyone (I’m sure Robert Shaw would have agreed with me… I’m sure of it), and considering the prior statement, it’s not hard to understand why. Doing so would require odds that rival getting struck by lightning. More than once. Every week for a full month.

So the bottom line for me is this: Seurat himself would not claim that in his grand painting every single dot has been perfectly placed. He would not claim that it was flawless, he would in fact be critical of many elements of it in hindsight. But what he accomplishes far transcends those details. Choirs are not to ignore those details in performance, quite the contrary. But they have to be willing to allow the audience’s ears to fuse together the intricate parts to accomplish a whole that has musical integrity and meaning. And that means letting go of the details the moment they’ve passed, it means not slaying one’s self over the missed B flat on measure 47 and instead understanding that not only did other members of their section cover for them, but that the missed note is inconsequential to the audience at that moment in time. Don’t get me wrong: a choir that hasn’t established that minutia at some point should not be performing that song. What I am referring to is the imperfect human element of performance. And our choirs can either torment themselves as they reflect on the imperfections, or they can bask in the glow of an artistic agenda that has been successfully achieved despite the imperfections. It’s often a tough sell for them, and sometimes a tougher sell for the conductor… but the only approach worth having is Seurat’s. And, to me, that is a wonderful artistic goal in and of itself. 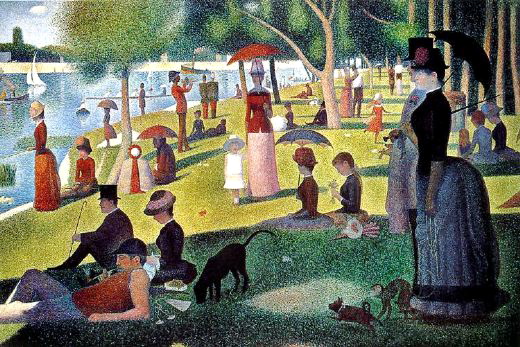 This entry was posted in Performance. Bookmark the permalink.