Last June I wrote a reflective blog post on teaching in my 50s which was more cathartic than instructive. Closing out my 19th year in York, I was concerned about several specific things: my energy level, that I was finished building what I set out to create and “now what?”, and that I felt more powerless than ever about being able to be there for the needs of kids as people. It all felt very draining and very much like added weight to me last Spring. That scared me. Seven years ago I was starting to burn out because I was just overloading my life professionally. Now, was this what it felt like to be burning out because I’ve been doing it all for so long?

My “utopian” year was my 14 months in Orono from 1995-1996 getting my Master’s degree. It was a dream come true on so many levels. But being in school, especially grad school, is designed to be that utopia. It’s the point of it. All the work you put in never feels like work. I felt challenged and rewarded in everything I did and I had the time to really focus on my craft… it was fun. Deep down, I think I set out trying to recreate this same scenario in my own choral program. So what happens, 18 years later, when you finish building it, it’s exactly what you set out to create…

…and it ends up not feeling like you thought it would? That’s what I was grappling with all of last year.

Turns out that the reason it didn’t feel right wasn’t because of what I had done, it was because of me. There were a few things I needed to mentally “get right” and it has made all the difference.

The first was pure providence. What I did not write about last June, but felt strongly, was a gnawing self-doubt in my abilities as a choral director and teacher. I was alluding to it in my concerns about my energy, but it went well beyond that. Was my *spark* starting to wane and was that impacting my effectiveness and ability? Moreover, I felt like I was starting to stagnate. I had established my protocol and routine for entry level singers and choirs, established my protocol for honors students and choirs, and had practiced and refined them for years. Was it getting stale? Three weeks after writing the blog post I headed down to Laurel Music Camp to conduct their choir for the week. It was my 7th time conducting down in Winsted CT, but my first since 2011. The camp is a very special place in that it is as much a week-long family reunion as it is a music camp. But there are some very high hitting musicians there too. Many of the teachers and staff there had observed my work in the prior years, quite a few who were singers of mine at one time. We spent a lot of time talking about rehearsal technique and approaches to teaching in general. I was surprised to discover that much of what I was doing they had not seen from me before. It became evident that I had evolved as a conductor and had not regressed. It was another incredible week down there, but my biggest professional takeaway was, “I still got it.” I don’t need kudos for my work. That’s not it. But I apparently did need affirmation that I could still do what I thought I was getting worse at. I even came away knowing that in some ways I had even upped my game a bit since 2011. Instead of beginning my Summer in doubt about my professional abilities, I began it by putting those fears to rest.

The second was continuing something I began the Summer before: just getting away from it all. Instead of filling my time off with professional stuff, I put it away for awhile. That my Summer is longer as a teacher than most others get to enjoy has little to do with it. Five weeks, 2 weeks, 5 days or just a weekend, I needed to mentally remove myself from my profession. This was my second consecutive Summer doing so, and it was amazing. I spend my down time on the computer and being a couch potato much more than I care to admit. But I also love running and mountain climbing. ALL of it allows me to just decompress. A big, sarcastic, “Gee Einstein, who knew?!” moment should be inserted here. This isn’t a revelation I’m unveiling here for anybody. But it was something that I’ve never valued so much before. I value it now. I have an inordinate amount of “me” time week to week, month to month, and I’ve always felt guilt around that, especially during the Summer. Jettisoning those thoughts and feelings was a necessary thing for me to do if I was going to keep moving forward in my 50s as a mentally and emotionally healthy teacher.

The third is what I challenged myself to do at the end of that blog post. I needed to focus on merely being in the moment and taking one day at a time. That latter phrase has a negative connotation in our society, usually associated as a coping skill during difficult or challenging times. That wasn’t at all my point of emphasis however. It was instead just adopting a Bill Belichickian approach to my career: “On to Cincinnati” means leaving the day before behind (after learning from it) and not looking beyond the one game in front of you (without losing the big picture in the process). Day to day. This Fall I have made it a point to do precisely that. And you know what? It’s worked. It has made ALL the difference. It’s removed about 80 pounds of stress of my back, and it’s allowed me to be in the moment in a very authentic way when I’m at school. I’ve worked hard to practice Matthew 6:34 in my personal life. I’ve never worked very hard at applying it in my professional life. Turns out I should have.

I was reflecting as I left work yesterday on what I had hoped to feel when I completed what I set out to do at York High School in the Fall of 2000. I was reflecting on how I was feeling last year and how it was so disconnected from the happiness that I thought I should be feeling about it. This Fall, I realized, I’m totally feeling it. I could write an entire BOOK on the last 19 years of my career and what I set out to accomplish, but that isn’t the point here. Rather, I simply drive into school each day feeling ridiculously happy and fulfilled, and I leave work each day feeling ridiculously happy and fulfilled. Not every day is fun. I have “bad” days and some meh days. There are things that still may irritate me or days where I’m black and blue on the forehead from incessant face-palms. What separates this year from the past 33 – save my year up in Orono – is that none of it is really impacting my joy for what I get to do every day, the joy of teaching in a program I got to build with sweat equity over 18 years, the joy of being challenged and rewarded on a daily basis, the joy of day to day watching my kids grow… all this has allowed me the mental and emotional energy to really be there for them, to keep making it about them.

I really just sometimes feel like an idiot, because my personal epiphanies are more often than not manifestations of merely common sense. 😉 I feel lucky and blessed that I have been able to create the program of my dreams. But I had to also learn – remember – that it’s all for naught if you yourself aren’t self aware of both your strengths and needs; fostering those strengths and addressing those needs, personally and professionally. Taking care of yourself is a good thing. When that happens, you end up being open to the day to day. And when that happens, you begin to rediscover the small little joys and successes that got you jazzed up about being in this profession to begin with. 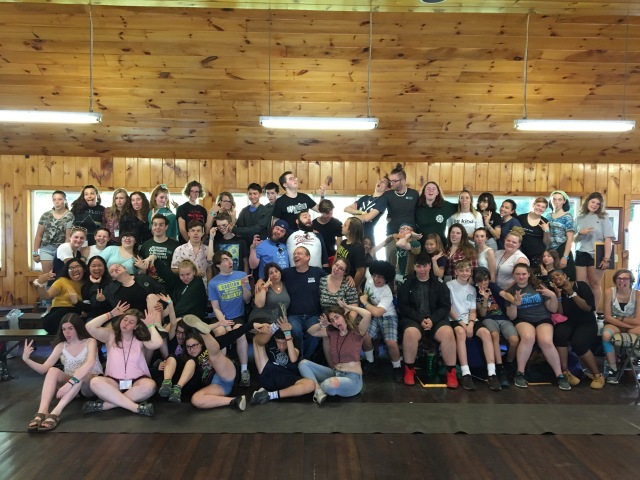