building bridges out of witches

R – I had three moments this week that were on the one hand completely unrelated, and on the other completely tied into genuine fears I have about the juncture we’re at in education right now. We’re at a crossroads philosophically, but decisions are being made due to the logistical implementation of what’s convenient. This runs completely contrary to my conviction that the “why” is more important than the “what”, and the opposite results in fads and passing trends. Standards vs. grades? Grades are the most convenient AND least transparent way of reporting ever created. As a matter of fact, our current system of grading in this country was established less than a decade after man learned how to fly (think about that). Student #1 gets a B+, student #2 gets a C+. NEITHER INFORMS THE STUDENTS OR PARENTS WHAT CONTENT KNOWLEDGE GAPS THERE ARE. AND BOTH ARE ACCEPTABLE FOR PASSING THE COURSE! Standards based assessment and reporting rectifies this. I will be assessing and reporting standards the rest of my career because this is the only way abject clarity is achieved in my book, not because it’s more convenient, someone told me to, or because it’s a fad. Planes are no longer made of “wood and fabric”, and I’m done with “grades”. So, into the breach comes Common Core. I’m not opposed to it in concept. I’m really not. As a matter of fact, someone who believes in standards such as myself should be giddy 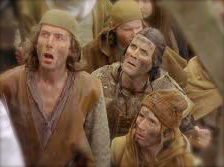 over them, right? But the idea and implementation of them is beginning to appear to follow the logic of the Witch test from Monty Python’s Holy Grail. Witches burn, and so does wood, so if you can prove she’s made of wood, this proves she’s a witch. How do you prove she’s a witch? “Build a bridge out of ‘er!” And so it begins…

1) A colleague of mine was bemoaning the fact that another teacher at their school was giving students multiple opportunities to demonstrate proficiency. One of those students was in a directed study hall for at risk students, and when told to study for that teacher’s test, the student replied, “Oh I don’t need to. I can fail it and take it again as many times as I want.”

2) I’m co-hosting a webinar this coming Tuesday on the “Arts and the Common Core” and was doing some research. I came across this quote: “Common Core standards are by no means perfect, but they are a B+ or A- in terms of standards,’ said Michael Brickman, national policy director at Thomas B. Fordham Institute.”

3) The national Common Core site has an introductory video explaining what the Common Core is. “Like it or not, life is full of measuring sticks (such as) how smart we are… (and) how well we can, you know, compete. But up until now, it’s been pretty hard to tell how well kids have been competing in school.”, “Is a girl in your neighborhood being taught as much as her friend in the next one?” The overt message that is then articulated is that the point of going to school is to get good jobs.

I’m convinced that we’re trying to bridges out of witches.

1) Is it true that standards based education and assessment requires multiple opportunities to demonstrate mastery – meaning “retake”? Yes. But the qualifier is articulated beautifully by Shawn Cornally: “A retake is silly, useless, and gamed easier than a d20. In education, we mean “reassessment” which is an ongoing measurement of a skill/idea that takes a long time to develop. Educators see students grow into skills and knowledge over time while non-educators think of learning as much more episodic. The latter is an unfair application of adult psychology onto children. The idea that we should give students ‘the low grades they deserve when they screw up’ doesn’t serve the fundamental role of school, which is to teach people things they don’t already know, because a low mark that can’t be worked on doesn’t teach anything…”. NONE of this has anything to do with rewarding laziness, passive approaches on the part of students to ongoing measurement, or lowering the expectations bar on a kid. Do we not fully understand these distinctions yet?

2) Brilliant. The national policy director at Thomas B. Fordham Institute just gave the implementation of standards a letter grade. Two actually, because he couldn’t decide which. Also maybe because he doesn’t know what the difference is between a B+ and an A-. Just like the rest of us.

3) WHY do we have schools, and what are their foundational principles? Isn’t it true that a great education is not about getting good jobs, but rather, if we have great schools and great educational systems, our graduates will have great lives which will include great jobs due to a great educational system? Apparently Common Core doesn’t believe that. It’s about competition, not depth of knowledge. It’s about knowing more instead of learning to learn. It’s about appearing to be sequential rather than actually being sequential. In that same video, it shows – SHOWS – how students are not allowed on the next stairstep up until they have reached the one before. How many students do you know who have been held back from attending High School because they didn’t meet the common core standards yet for 8th grade? And how many parents of those students would raise holy hell if Common Core was actually enforced?

Implementation of a philosophy requires adhering to that philosophy, not the tweaking of it so it appears to work or to make it convenient to work. Reassessment becomes bastardized the moment we forget the foundational reasons for doing it (why). Evaluating the success or failure of standards based anything requires looking at it through a lens that focuses on its purpose (why). Changing our schools and what we do in them is a dangerous thing unless we assure that it is aligned with the point of having public schools in the first place (why).

“Can’t we all just get along and go with the recent trends, what’s so wrong with that?” I already have heard stories of music colleagues being forced to use professional development days to assess ELA prompts, and being told that their evaluations as music teachers will be tied directly to their students’ math scores. You tell me.

Join me Tuesday afternoon, April 8 from 3:30 to 4:30 for the live webinar on Common Core and The Arts (the archived webinar will be linked here as well afterwards):

This entry was posted in Assessment, Standards. Bookmark the permalink.

2 Responses to building bridges out of witches